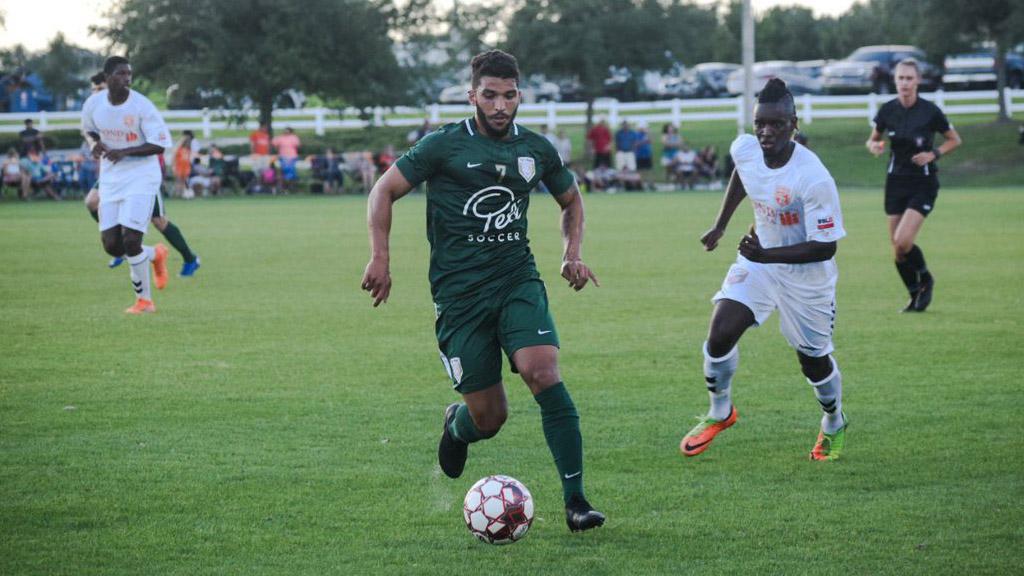 AUBURNDALE, Fla. – A rich rivalry had another dramatic chapter added to it on a warm Tuesday night in central Florida as The Villages SC claimed an 8-7 victory in a penalty shootout against USL League Two rival the Lakeland Tropics after the sides had played to a 1-1 draw through regulation and extra time in the First Round of the 2019 Lamar Hunt U.S. Open Cup.

At the center of it all was Villages goalkeeper Jerfesson, who denied Lakeland’s Kazuki Kimura with a low save to his left to lead off the 10th round of the shootout to allow Sukrija Dudic to convert with a low shot to the left corner and clinch victory for the visitors, who advanced to face the USL Championship’s Tampa Bay Rowdies in the tournament’s Second Round.

Both teams applied a lot of pressure early on with the Tropics getting forward more often, but in the 17th minute The Villages found the opening goal. Danilo Segilo darted into the penalty area and took a left-footed strike that was saved by Lakeland goalkeeper Adrian Llorente, but the rebound deflected back to Segilo’s right foot and he rocketed his finish into the back of the net for the early lead.

The Tropics continued to apply pressure in search of an equalizer, and it arrived just before halftime as Raheem Taylor-Parkes received a short cross from the right in the middle of the penalty area after a good turn and run by Chase Hovious that he was was able to slide home to the left corner.

The second half brought more attacking intent from the Tropics as they continued to create more chances without being able to find a go-ahead goal. Each attack for The Villages seemed to lead to a swift counterattack from Lakeland, but neither could find the deciding goal through the end of 120 minutes.

The shootout then provided more drama as Lakeland took the early edge when Llorente saved in the second round from Gabriel Cabral. That advantage swung the other way as Jerfesson made back-to-back saves in the fourth and fifth rounds to give The Villages a shot at victory with the second shot in the fifth round, but the goalkeeper himself was denied by his opposite number to send the shootout into sudden death.

After both sides had converted four shots in a row to take the shootout to a 10th round, however, Jerfesson earned his side another shot at victory with his save on Kimura. Dudic then stepped up to convert as The Villages earned their first trip to the Second Round since 2016.

What a GAME!@TheVillagesSC take down @lakelandtropics and will move on to the 2nd Round to compete with the @TampaBayRowdies!#USOC2019 pic.twitter.com/sCA0QUUDAV

SOUTH GEORGIA TORMENTA FC 2 (3), CHATTANOOGA RED WOLVES SC 0: In its first official game, Tormenta FC 2 pulled off the first upset of this year’s tournament with a resounding victory against USL League One’s Red Wolves at Erk Russell Park. After having previously had a goal ruled out for offside, Jarvian Wigfall got the hosts in front in the 25th minute as he squeezed home a shot that found the left corner of the net. South Georgia doubled its lead just before the hour-mark when Adrian Billhardt set up Luca Mayr, and then with 15 minutes to go Billhardt added a goal of his own to sent Tormenta 2 through to a matchup with the USL Championship’s Nashville SC next week in the Second Round.

Full between @TormentaFC_2 and @ChattRedWolves and it's Tormenta who come away with the 3-0 win. #USOC2019

Check out the highlights pic.twitter.com/h7evt4AAwL

NEW YORK RED BULLS U-23 4 (5), FC MOTOWN 4 (3): Goalkeeper Marcellin Gohier came through in the fourth round of a penalty shootout to send the Red Bulls U-23 through after a wild contest at MSU Soccer Park. Motown took the lead after just three minutes thanks to Joseph Fala, but the Red Bulls U-23 took the lead before halftime as JP Marin and Brian Saramago found the net eight minutes apart. New York added to its lead in the 59th minute as substitute Omar Sowe struck, but Motown got back on level terms a Kene Eze first scored and then provided the assist for Cameron Vickers to level the game on goals a minute apart.

The Red Bulls U-23 again took the lead in the second period of extra time as Jeciel Cedeno scored in the 110th minute, but with two minutes remaining Motown sent the game to a shootout as Maxi Garcia added to the game’s drama. New York held its nerve in the shootout, however, as John Murphy, Cedeno, Sowe and CC Uche all converted from the spot in the opening four rounds, and after Gohier denied Motown’s Marcus Hackett with a diving save to his right on the second shot of the fourth round, Sal Esposito’s shot to the left corner sent the Red Bulls U-23 through to a contest against the USL Championship’s Memphis 901 FC in the Second Round.

It ended 4-4 after 120 minutes, but @RedBullsAcademy emerge victorious and advance to the next round after beating @fc_motown on penalties.

Watch the highlights from this eight goal thrillerpic.twitter.com/Q8kd4niWVY

LAREDO HEAT SC 1, BRAZOS VALLEY CAVALRY FC 0: Cavalry FC’s first trip to the Open Cup ended in the first round as a second-half penalty kick sent Laredo into the Second Round. Francois Sakou converted from the spot on the hour-mark for the hosts as both teams finished the game with 10 men after a pair of red cards in the final half-hour.

ORANGE COUNTY FC 2, FC GOLDEN STATE FORCE 0: The Force missed out on a third consecutive trip to the Second Round of the Open Cup as goals in either half saw Orange County FC advance at Championship Soccer Stadium. Cody Shelton spun home the opening goal for the hosts in the 28th minute with a finish to the right corner, and while Golden State forced numerous saves from OCFC’s goalkeeper it was unable to find an equalizer. Aaron Lombardi then added a second for Orange County with a dipping free kick from the right to send his side on.