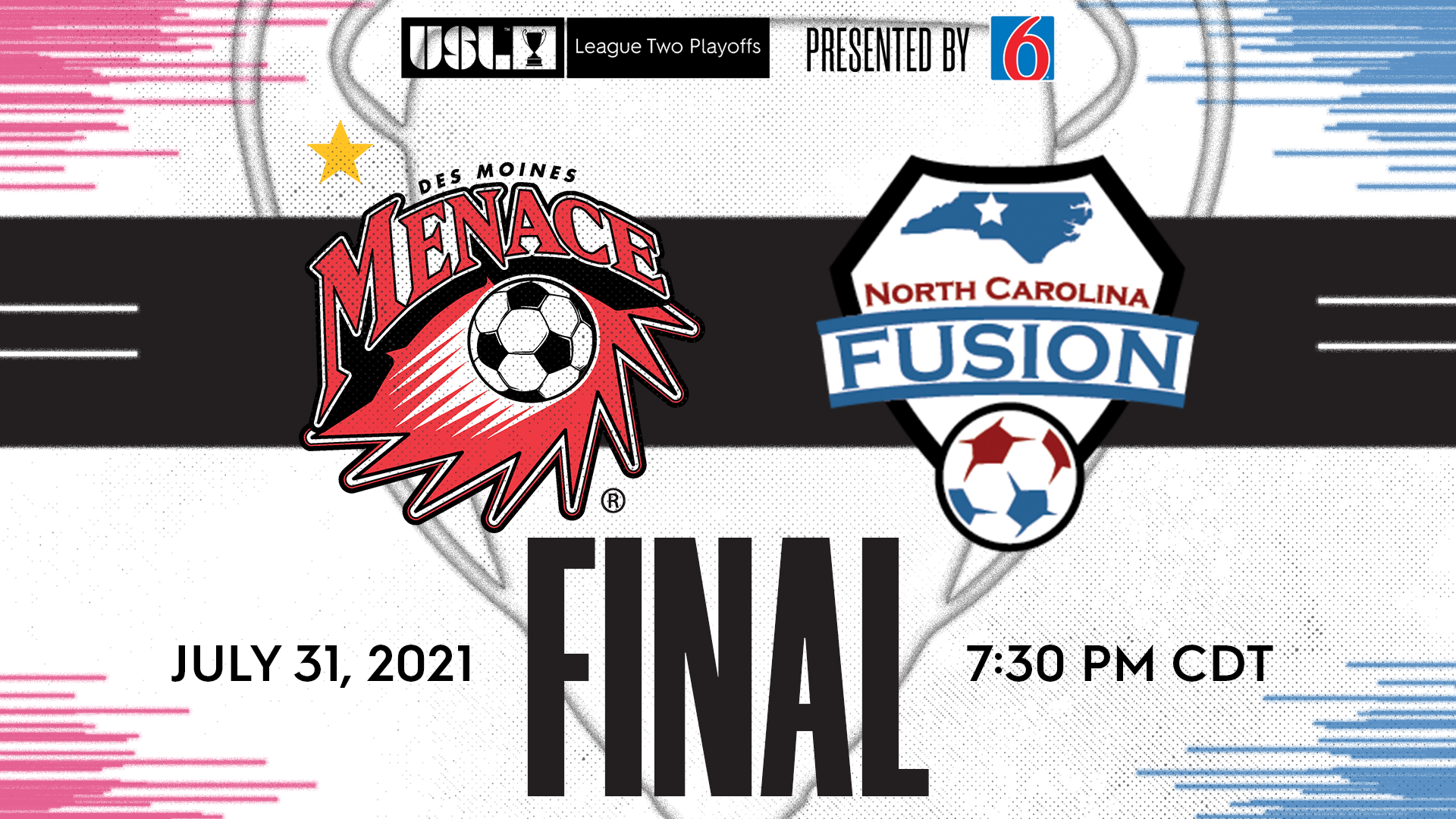 TAMPA, Fla.- The 2021 League Two Final Presented by Motel 6 will see the Des Moines Menace take on North Carolina Fusion U23 for a 2021 League Two title-winning season. After fighting through four rounds of playoffs, the two remaining teams now look to secure a title in the League Two Final on Saturday, July 31. Ahead of this weekend’s match, here is how the competition stacks up.

Two of USL League Two’s most established franchises will meet for the first time ever in league history at Valley Stadium in Des Moines, Iowa to crown the title-winner of the 2021 season. The Des Moines Menace, founded in 1994, has secured a single League Two title in 2005 over the course of its 27-year existence while North Carolina Fusion U23 came about in 1993 and has yet to win a League Two title in its 28 years of existence. However, on Saturday night one of these teams will add a star to its crest and take home the honor of a 2021 USL League Two title-winning season.

The Des Moines Menace has had what some would call a storybook season. The club dominated its way through the 2021 regular season putting up a final record of 11-1-0, scoring 32 total goals and only conceding seven goals thanks to the clutch hands of Holden Trent and Ethan Bandre. Although the Menace were faced with much adversity with the losses of League Two’s Top Prospect Kingsford Adjei and top goal-scorers Nil Ayats and Sebastian Andreassen, the team has managed to keep pushing on and have earned themselves a regular season title, a Central Conference title and a coveted spot in the League Two Final. Now, with only 90 minutes and a fiery Fusion U23 squad standing between the Menace and a title-winning season, the team will need to channel their winning mentality one last time. The true test for the Menace heading into Saturday’s match will be the team’s ability to stay unified even with some missing parts. However, the Menace have shown time and time again that adversity is not an issue for the squad but rather a challenge they welcome with open arms. If the Menace can maintain composure against a high-scoring Fusion U23 squad, they may in fact add another star to their crest in the 2021 season.

North Carolina Fusion U23 has fought 28 long years for a chance to prove they have what it takes to bring home a title to the Triad. The Fusion squad came out of the gates swinging this season having put up a regular season record of 11-2-1 while recording the most goals in the entire league with 48 goals to their name. The team finished out the regular season strong and found themselves in one of the toughest playoff runs out of all 26 teams that qualified. However, the Fusion proved why they are one of the best teams in the league when they took out South Georgia Tormenta FC 2 in extra time of the Conference Finals to earn themselves a Southern Conference title and a spot in an intense National Semifinals match. Although the Fusion were faced with a tough opponent in the Western Mass Pioneers, players such as Joao Gomiero, Mason Duval, Henrique Santos and goalkeeper Josh Perryman allowed the team to prevail as they defeated the Pioneers in a 3-1 victory. The Fusion U23’s undeniable passion for the game has been evident as the team tirelessly worked its way to a qualifying spot in the 2021 League Two Final. Now, only one thing stands in the way of a title-winning season for the Fusion U23 and with the pressure building and all eyes on the pitch, the Fusion squad is more ready than ever to rise to the challenge. If the team is able to continue applying the offensive pressure on the Menace like we have seen all season, they could have a pretty clear shot at earning their first title-winning season in league history.