What league DO the Green Bay Voyageurs Play In?

The proven developmental leader in North American soccer's evolving tiered structure, USL League Two (formerly the PDL) features 74 franchises in four conferences throughout the United States and Canada, including 18 clubs that are owned and operated by a professional club, or that hold a partnership with a professional club. League Two has proven to be an important stepping-stone for top professionals now playing throughout the world, with more than 70 percent of all selections in the MLS SuperDraft since 2010 having PDL experience, including 66 selections in the 2018 MLS SuperDraft.

The USL League Two season begins in late May 2020 and will continue through early August 2020. However, Green Bay Voyageurs FC friendlies (exhibitions) can be played outside of this range.

The League Two season consists of 14 regular season matches for each team, seven home and seven away, and provides elite collegiate players the opportunity to taste a higher level of competition while maintaining their eligibility. In addition to league play, League Two teams compete in the Lamar Hunt U.S. Open Cup as well as various exhibitions.

The USL League Two regular season takes place during the summer from early May to mid-July. Each team plays a 14-match schedule against their respective divisional opponents, seven at home and seven away. In conferences with three divisions, each division winner, plus the highest-finishing second-place team in the conference, advances to the playoffs in the conference semifinals. In conferences with two divisions, the top two teams from each division advance to the conference semifinals. The playoffs occur in late July, with each conference champion advancing to the national semifinals and the winners of those matches advancing to the League Two Championship in early August.

USL League Two clubs also compete in the Lamar Hunt U.S. Open Cup, entering in the first round of the competition. The League Two participants in the historic tournament are determined by standards set forth by the U.S. Open Cup Committee, with each division winner (or the highest-placed U.S. club in the event a Canadian-based club wins a division) having priority, and any remaining teams determined by at-large bids as laid out by the committee.

Eighteen clubs from League Two competed in the 2018 edition of the Open Cup. Three League Two clubs, the Ocean City Nor’easters, Mississippi Brilla FC and FC Golden State Force, advanced to the third round by defeating professional teams, with FC Golden State Force advancing past a pair of USL Championship sides to reach the Fourth Round where it squared off with historic Major League Soccer club the LA Galaxy.

Capital Credit Union Park and the Green Bay Voyageurs FC both debuted in May 2019. The multi-use stadium is one of the finest in the League. It offers tremendous fan amenities, food and beverage options, group experiences and sightlines. The location at 2231 Holmgren Way is less than a mile from historic Lambeau Field, home of the NFL’s Green Bay Packers. It is very accessible throughout Northeastern Wisconsin, less than 30 minutes from the youth soccer hotbed of Appleton, WI and 15 minutes from the ten-field Azco Soccer Complex in Howard, WI. Information about Capital Credit Union Park can be found here. 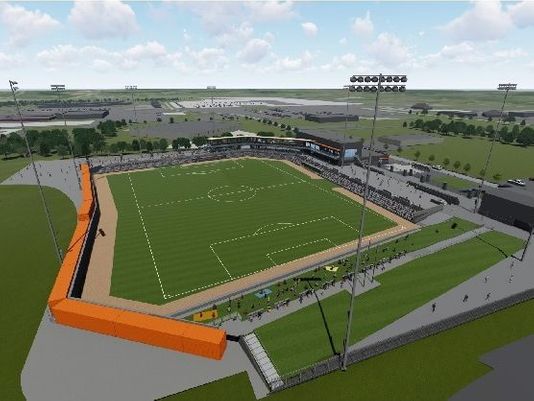 Where can I find the Green Bay Voyageurs fc 2020 schedule?

The 2020 schedule can be found under the 'Club' tab on our website.

The roster will be assembled starting this fall and feature top collegiate players from around the country.

Green Bay Voyageurs FC will host tryouts near the end of March. Check the website after March 1st for information on potential invitation or open tryouts.

What is the difference between Major League Soccer (MLS), USL Championship, USL League One and USL League Two?

Major League Soccer (MLS) is the top division of soccer in the U.S and Canada.

The USL Championship is one of the most prominent lower division soccer leagues in the world, with more than 30 markets across the United States and Canada.

The League's foundation and long-term stability are rooted in its strong local ownership which features owners of NFL, MLB, NBA, NHL and European soccer team owners. USL League One, a third-tier professional league debuts in 2019 with a Wisconsin team based in Madison. Madison Pro Soccer will be named soon and like Green Bay USL League Two is owned and operated by Big Top Soccer.

USL League One is the third division. Some MLS teams have reserve squads that play in USL League One, but the majority of USL teams are individual franchises.

Orlando City, Seattle Sounders, and the Portland Timbers are all examples of teams who grew into MLS teams from the lower divisions and proved how strong a soccer community they have -- and we know Green Bay can show that passion as well!

Is Green Bay voyageurs fc affiliated with any academies or any youth league programs?

Where will the team's players come from?

USL League Two teams are comprised of some of the most talented amateur soccer players in the United States as well as outstanding young international players. The high caliber of talent developed locally and at the state’s men’s college soccer programs means the team will feature a good number of Wisconsin players. The Wisconsin ownership group strongly believes that Wisconsin talent should be reflected in the makeup of the state’s professional soccer team. There will also be top collegiate players from throughout the United States on the Green Bay team.

How much will tickets cost?

How can I help?

The vision for this team is one that is built from the bottom up and represents the community at large. The local ownership group needs anyone in Northeastern Wisconsin with a passion for soccer and a desire for it to have a successful soccer team to do the following:

1) Promote the team to your personal and professional networks.

2) Pledge your support with a commitment of one or more season tickets.

3) Provide your input into the team’s development by telling the team’s management what you want to see in this team.

4) We will be looking for host families to house Green Bay League Two players for about three months during the season.

Most players will arrive in Green Bay sometime in mid to late May. The regular season starts in late May and ends in mid-July. However, the season can be extended if the team reaches the USL League Two playoffs. Host families house, feed and provide the player with lots of support. The player is a member of your family during their time in Green Bay. Hosting a player can be a rewarding experience.

A few of the benefits include:

• The player will be a positive role model for your children

• You will be more involved with the community

If you are interested in learning more about this program, please email Green Bay team GM Dannon Anderson at Dannon@greenbayvoyageurs.com.

Who is the Wisconsin ownership group?

Green Bay Voyageurs FC is comprised of the owners of the Green Bay Northwoods League baseball team and three other Northwoods League teams: Steve Schmitt, Vern Stenman and Conor Caloia along with Jim Kacmarcik, the majority owner of the Lakeshore Chinooks, a minority owner of the Milwaukee Bucks and the owner of Kapco, Inc. They have a passion for the community and for sports and have recognized the changing demographics of the area. They want to provide the community with a quality experience.

They see a proud city, with families looking for entertainment that is a good value and young urban residents and new Americans looking for a soccer team to call their own. They recognize the growth of the sport nationally over the last several decades and want Green Bay to be at the forefront of the sport’s growth.

How will they help the soccer community?

Green Bay Voyageurs FC recognizes that the team has a responsibility to use its resources to give back to the same community it hopes will be supporting it. This means the team will provide outreach to the youth soccer community to help more kids participate in soccer. They will also inspire those already in the sport to play longer with an aspiration influenced by role models wearing Green Bay Voyageurs FC uniforms. Green Bay’s soccer team is committed to giving back and helping make its community a better place to live, work and play. The team will be a platform for some of the state’s best players to be ambassadors in the community, showcase their skills, live their dreams and have the chance to launch a career on a bigger stage.

The team will also provide a positive economic impact on the community. Up to 50 full-time, part-time and seasonal jobs will be directly created.